Review of the machine translation tool Deepl for Japanese to German

In general, when translating a Japanese text with DeepL the results in German are pretty close to the results in English so you encounter similar issues as we already mentioned in our previous article. In this article, we would like to focus on the issues specific for German and issues we discovered recently.

DeepL still has problems to differentiate between “You” and “You”

As we already mentioned in our article reviewing the DeepL translation from English to German, DeepL tends to translate “You” as “Sie” even in cases when it does not address a person but is used to make a general statement and rather should be translated with “man”. The same is the case for translation from Japanese to German. However, the previous issues that DeepL sometimes switches between a formal you and an informal you in one text seem to have been fixed. Also, there now is an option available that lets you choose between formal or informal , however, that is only available in the paid version.

Similar issues can be found for “I” and “we”. As in Japanese often the subject is left out it can only be assumed from the context whether the subject of the text is a single person on several persons. DeepL, in general, tends to assume “I” is the correct translation.

DeepL tends to use the female form by default in its translation, however, it can be adjusted with a single click when editing the text on the DeepL website. 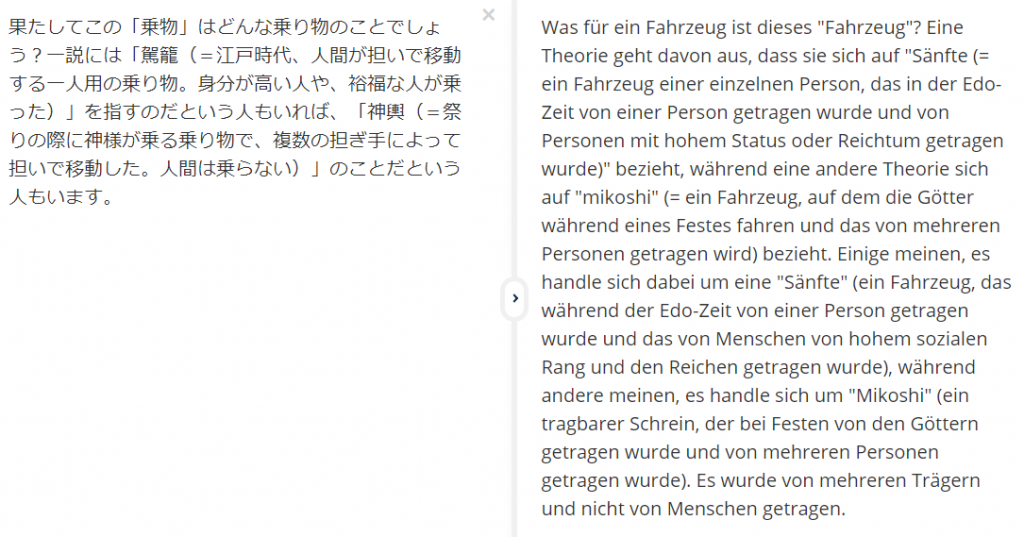 As you can see in this example from one of our articles about Kanda. DeepL sometimes translates sentences twice. The translation would be fine if it ended at “bezieht”, however it then presents the same sentence in a slight variation. We are not sure why that happens but, in our experience, it occurs more often in texts that use a lot of brackets or different kinds of brackets. This issue is not necessarily limited to German and happens when translating from Japanese to English as well.

If you are looking for human translation from German to Japanese, we would be glad to assist you.