This year Japan suffered a direct hit from a Typhoon which caused major flooding and landslides in the Tokyo Area, leading to the flooding of homes and resulting in at least 10 fatalities. Japan has been beset with not only earthquakes but also flooding disasters since recorded history. The issue of flood control is one that has been passed down from previous generations to modernity.

It goes without saying that flooding is not a problem unique to Japan. We humans, who developed our civilizations by settling on riversides, are still unable to fully control the flow of water systems, despite our incredibly advanced technology. It is thus quite understandable that many cultures have long held superstitious beliefs about dangerous water creatures, or that some worship various water gods.

Moreover, the Kanda River is not exactly small. With a total length of 24.6km and a drainage area of 105km2, it is one of the biggest mid-sized rivers that run through Tokyo Prefecture. The source of the river is Inokashira Pond in Kichijōji, and by the time it reaches and merges with the Sumida River in the east, it cuts through almost the entirety of Tokyo. It’s said that throughout the Edo period, the Edo Shogunate and its people struck somewhat of a compromise with the Kanda River in order to survive. 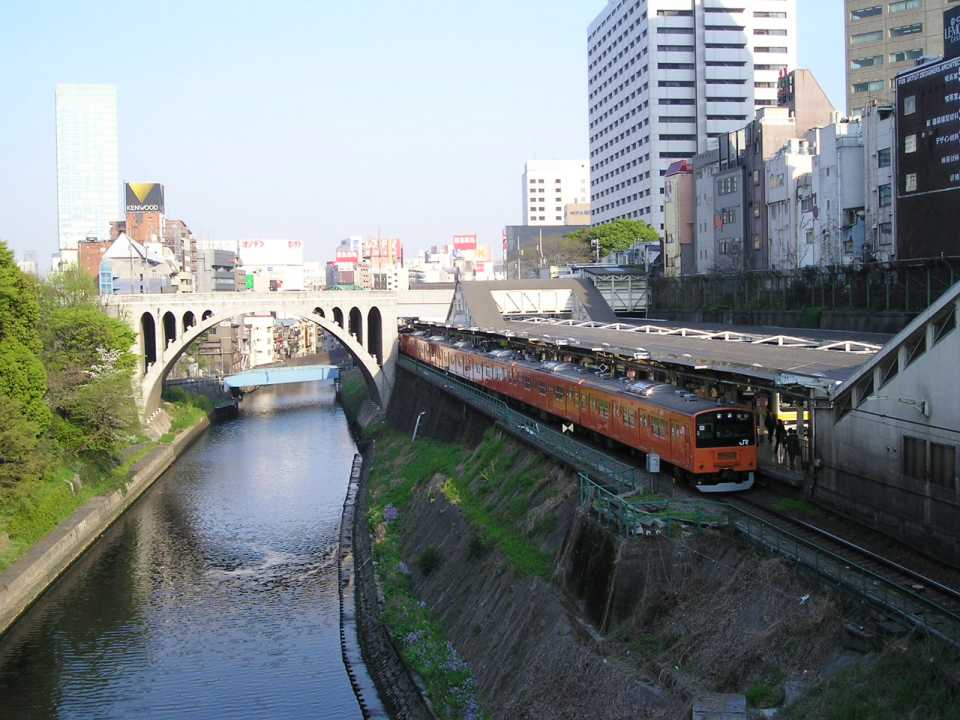 In fine weather like this, the river looks quite calm, doesn’t it? (Wiki)

The History of Flood Control Efforts in Japan

First, let’s take a look at what flood control efforts looked like throughout Japan’s history.

River management up until the 10th century consisted mostly of digging trenches to direct the flow of sewage and creating levees by driving stakes into the ground. Although this method seems rather simplistic, its basic concept was ultimately correct and is still used to this day. Around that time flood prevention was mainly the enterprise of the nation’s leaders. This changed in the 11th century, however, when Gekokujou (the act of surpassing your lord or superior) became more prominent. At this point, many wealthy noble families who had recently acquired autonomy over their land began to run flood control operations themselves. Then, during the subsequent Warring States Period, the need for further fortification of castles and citadels arose, leading to a rapid surge in the development of civil engineering technology. The Shingen Levee in Yamanashi, built by the famous Daimyō Takeda Shingen, as well as the Taiko Levee in Kyoto, built by Toyotomi Hideyoshi himself, are two particularly famous examples of this.

Continuing on to the Edo period, flood prevention programs expanded in scale due to how necessary river systems proved to be for the development of a stable economy. Several new river management methods were devised, one of the most common being “River Relocation”. This was a substantial task that amounted to redirecting the flow of one river so that it merges with another one. Furthermore, the people of the Edo period chose to build their levees lower, but in two layers, which meant that in a flood, water would overflow with less force. They were aware of the dangers of an overly tall levee suddenly breaking. Many documents detailing flood control methods have been successfully preserved, so we encourage those with an interest in Japanese historical archives to take a look!

So, What Happened to the Kanda River?

During the Edo Period, the Kanda River underwent repeated river relocation, excavation, width extension, and land reclamation. The burden of these construction projects was borne primarily by the Daimyō, the feudal lords of the era. Those Daimyō who were forced to pay were undeniably dealt a serious financial blow. To commemorate the hard work put in by the famous Daimyō of the Sendai Clan, Date Masamune, the part of the river that flows between Iidabashi and Akihabara stations is called “Sendaibori” (or “Sendai Canal”). However, despite the efforts of the Daimyō, it seems the Kanda River flooded quite frequently. The people of Edo were continuously plagued by broken bridges and disruptions in the water supply.

During the post-war Japanese economic boom, the water pollution levels in the Kanda River rose dramatically due to the sudden surge in domestic wastewater, so much so that it gained the nickname “The River of Death”. However, in recent years thanks to efforts to improve the water network, as well as the fact that the river was originally rich in spring water, it has been successfully revitalized to the point that carp, Ayu, and other fish can once again call it home.

The source of the river, Inokashira Pond (Photo by おむこさん志望 // CC BY 3.0)

If you walk along the Kanda river for 24 kilometers, you’ll arrive at its source: Inokashira Pond. It’s said that the view of cherry blossom trees along the Kanda River is particularly beautiful, so to those of you who are avid walkers, why not channel the energy of the Daimyō who helped build it and go for a stroll?